BeePi Brings Back Power Without the Price
18 March, 2017 by

I really like the Raspberry Pi. I've had a lot of fun with it so far and used it as RetroPie with Nintendo Wii U Pro Controller, and as a Linux box to tinker with. I bought the Pi2 when it first came out and that is what I'm using to review BeePi.

In many ways the Raspberry Pi brings us back to the good old days of computing with kids being excited about learning to program and play around with it. Sort of like a nostalgic blast from the 80's. So when Philippe first announced the BeeKey, I immediately thought that the Pi would be perfect for it and made a suggestion to that effect. Now, I'm not saying that I'm the father of BeePi, not in the least. But I'd like to think that I had a tiny part in its conception. All credit to Philippe for immediately starting to work on it after several others chimed in to wish for a Pi version.

To my regret, even though making the initial suggestion, I never even tried to install my idea. I put it down to me having had a full plate for a while. But reinvigorated by my renewed venture, and having more time on my hands these days, I finally bit the bullet and went for it.

The first place to start is obviously Philippe's website. From there we navigate to download the BeePi image. At the time of writing, it's beta 9. To install, we follow normal Raspberry Pi installation procedures. I used the Mac guide and the terminal method, which I'm not going to any deeper into as it is comprehensively laid out in the guide.

After installing the image to the SD card, all that was left was to put the card into the Pi and turn the power on. Right off the bat I got the four raspberry logos followed by a very cool Aranym splash screen. Pretty impressive. After a few seconds a setup screen appears that looks like any other Pi setup screen. At this point we have to turn to the manual to move along. 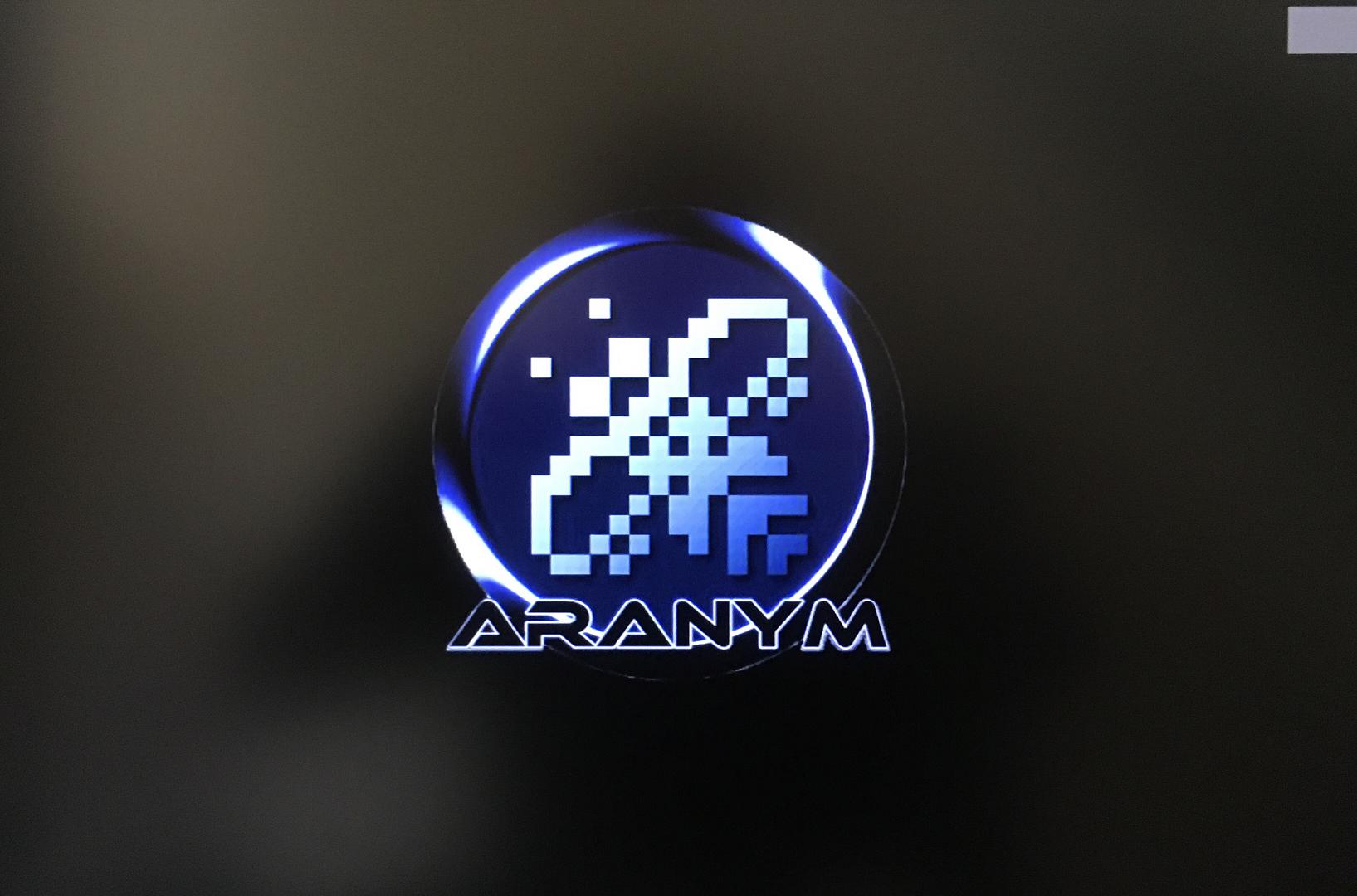 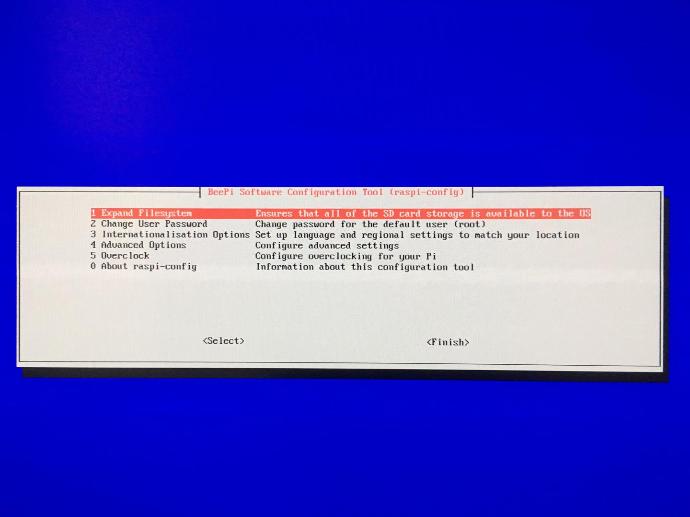 There are two phases to the installation, 1st Boot and 2nd Boot. 1st boot is where you quickly go through the setup screen (very easy) and when you're done the system reboots into 2nd Boot phase, which actually brings you all the way into the desktop. I was pretty blown away by how polished and refined everything was. In fact, I was quite overwhelmed by everything. It's been 15 years since I last booted into a MiNT setup.

I tried to make sense of everything and decided to look through the boot sequence. At first, we get the EmuTOS screen. After that things really start happening. It's immediately clear that this setup hasn't just copied mint.prg into the auto folder. This is the real deal I used back in the day. A truly modern OS. 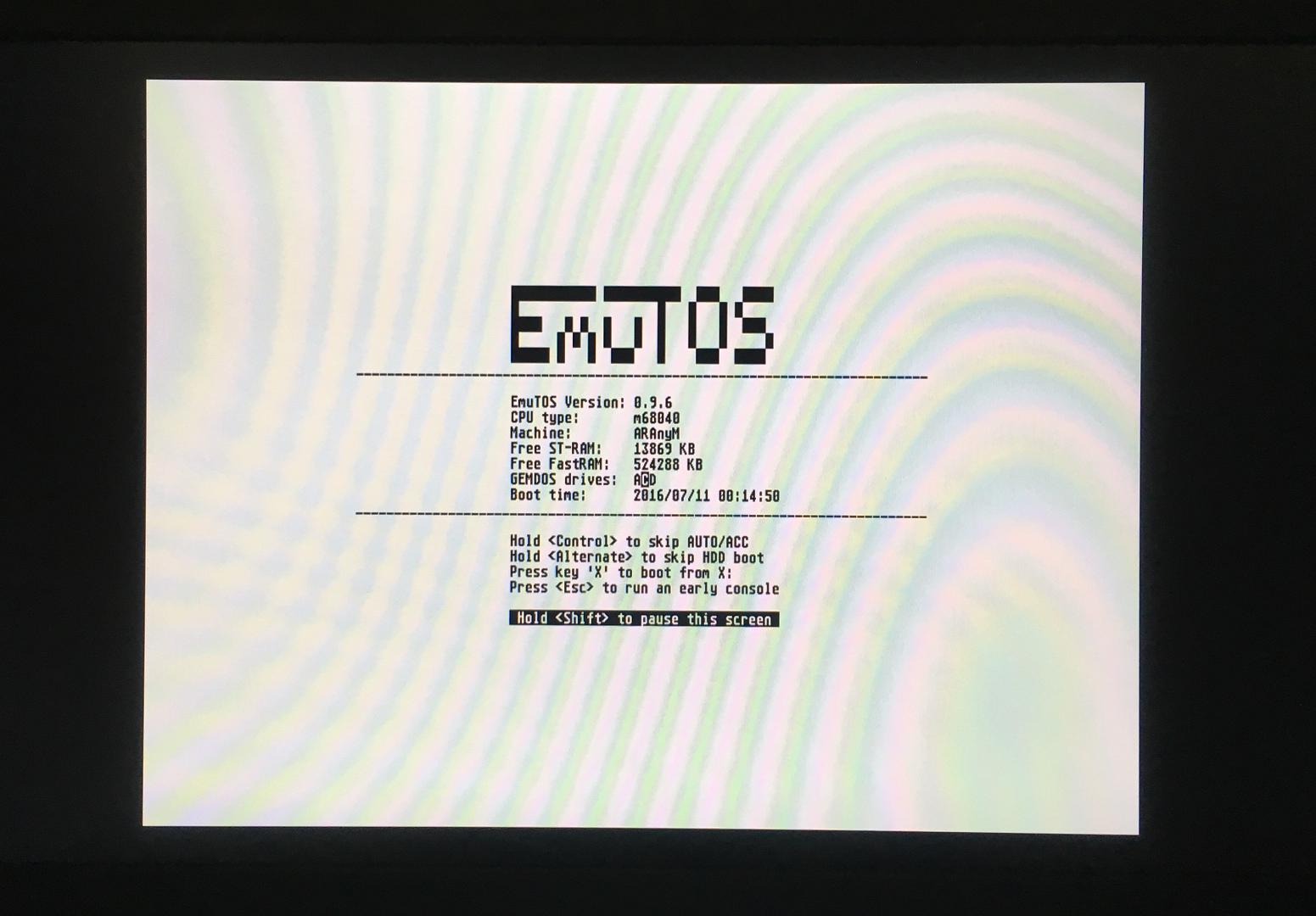 2nd Boot brings up straight into the desktop environment. It's gorgeous and I will go into it later. Philippe has created a setup process to help choose network interface, mount a network drive and others. It's all very well thought out in advance to make an advanced MiNT installation and setup as user-friendly as possible. Alt+F2 brings us to the Aranym setup where one can make further changes. 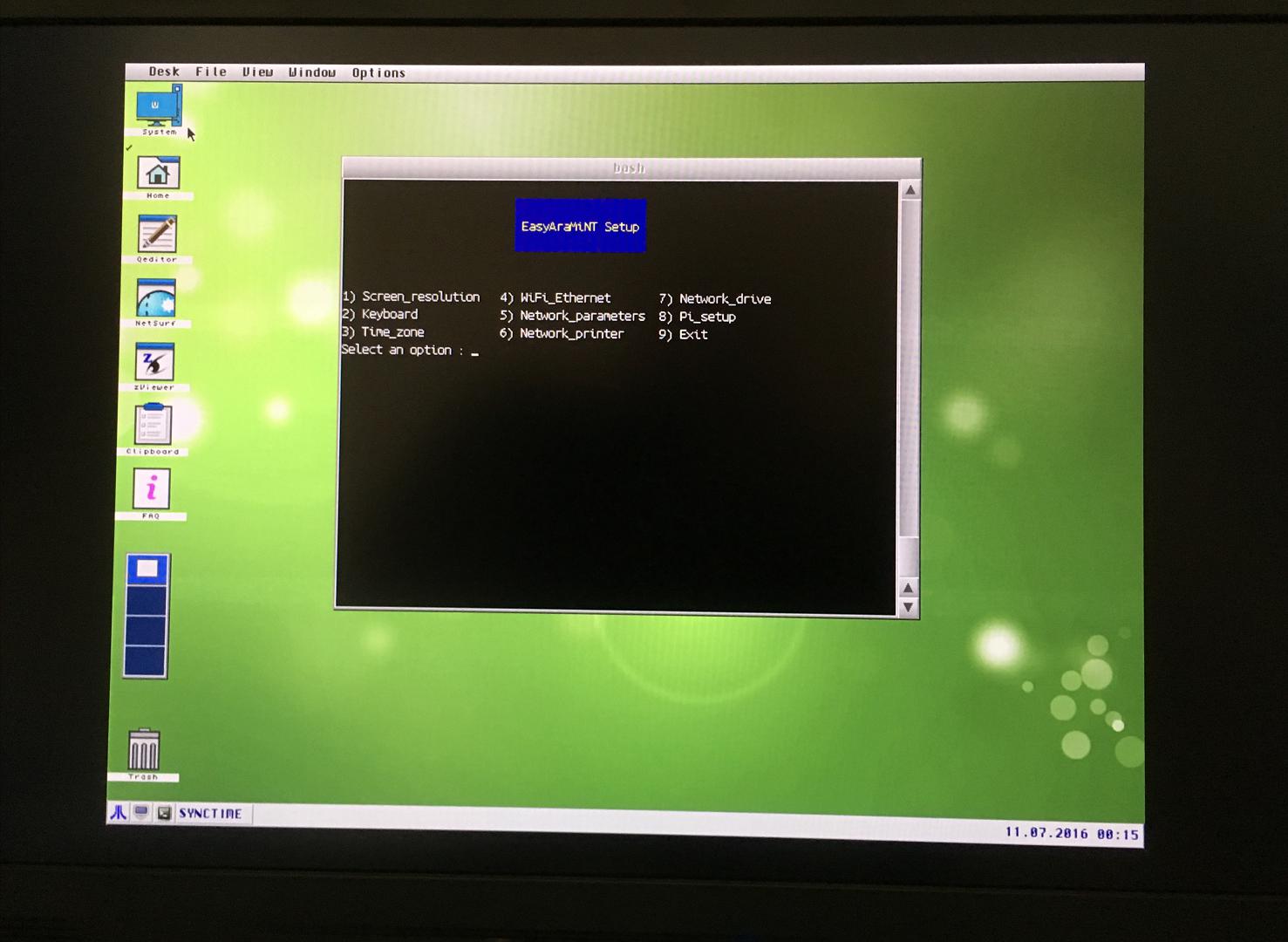 For the purpose of sticking strictly to the BeePi aspect of things in this review, I will assume that the reader is familiar with setting up Aranym and MiNT.

During the 2nd Boot, the boot process hung up on mounting the network drive and I figured it to be an problem with the network settings. After trying it out, the network didn't work as I had suspected. I opened the shell and did a ifconfig and everything seemed fine there. I did a ssh root@beepi to get into the host and did an ifconfig again. Having a Pi2 I only have Ethernet and was expecting to see eth0 there but the whole interface was missing. A quick dmesg | grep -i eth0 told me that eth0 had been renamed to eth1. Weird.

After struggling for a bit I got everything to work. The steps I took was that I first edited /etc/resolv.conf with Google's DNS server and then did the following:

Problem is, it reverts back to what it was every time I cold-boot and I have to enter the previous commands in the host side to get things working. Philippe just found out that it's a bug and posted instructions on how to fix it. I have have yet to try it but I'm sure it will fix it. (Edit: I have tried the fix and it has indeed fixed the problem). This will also get addressed in future BeePi releases. Again, I have to credit Philippe for responding so quickly and doing a wonderful job at supporting his creation.

This pretty much completed the basic setup to get everything going. Sure, there's lots to customize but very little effort is required (barring network problems) to get started.

I was totally blown away when I had first reached the desktop. My initial reaction was "could this really be an Atari?" The taskbar, the shell, the GUI, everything screamed modern OS. It kind of makes me regret ever quitting Atari as my main machine back in 2003. I had been using a Milan 060 and decided to sell it and move on.

MiNT, in my opinion, is the true Atari OS and rightful heir of TOS. In many ways the modern Mac OS and MiNT are similar to one another with both having an underlying UNIX-like OS. Personally, I can't live without a CLI. I always have a terminal window open on the Mac and I constantly have to do weird things on it. Command line is something that will never go away. 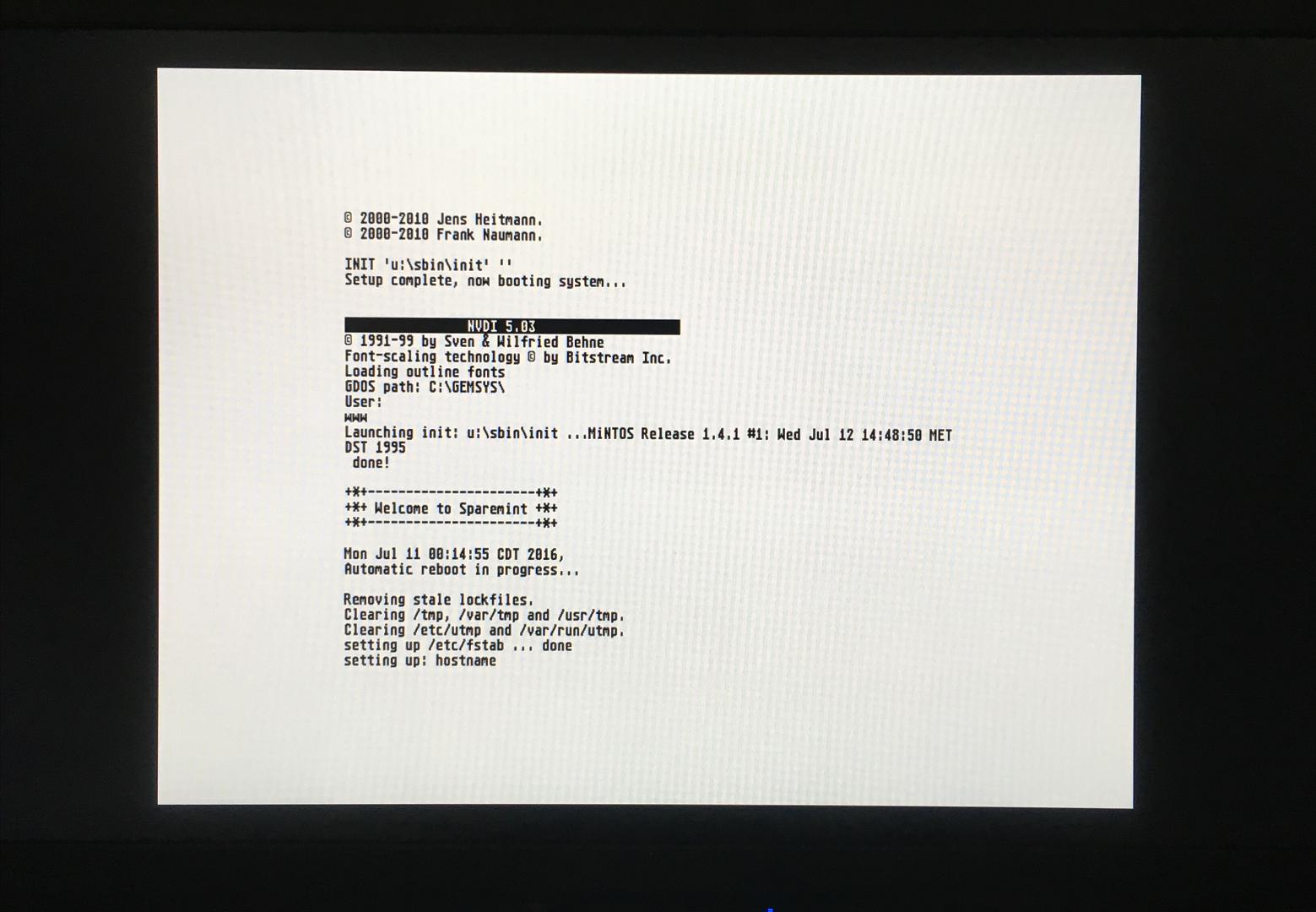 During the initial boot, amongst the the stuff scrolling on the screen, I had noticed NVDI 5.03. I remember that being a commercial program and was wondering how it ended up on this distribution. I then noticed this disclaimer on the website:

Disclaimer: former commercial software are part of these distributions. All these software have not been developed for the last 10 years and are no longer sold by their respective copyright owners. They can therefore be considered as abandonware. They are present in this archive for educational and historical conservation purpose only. Nevertheless, should the copyright owner wants his software removed, please contact me and it will be immediately removed.

Well, that's fine with me. I noticed several other commercial programs pre-installed as I went through the Taskbar. Everything works. I found Kronos and went through the benchmarks. Pretty good. I hope I don't get spoiled by the speed and be disappointed with the TT's performance once it arrives. 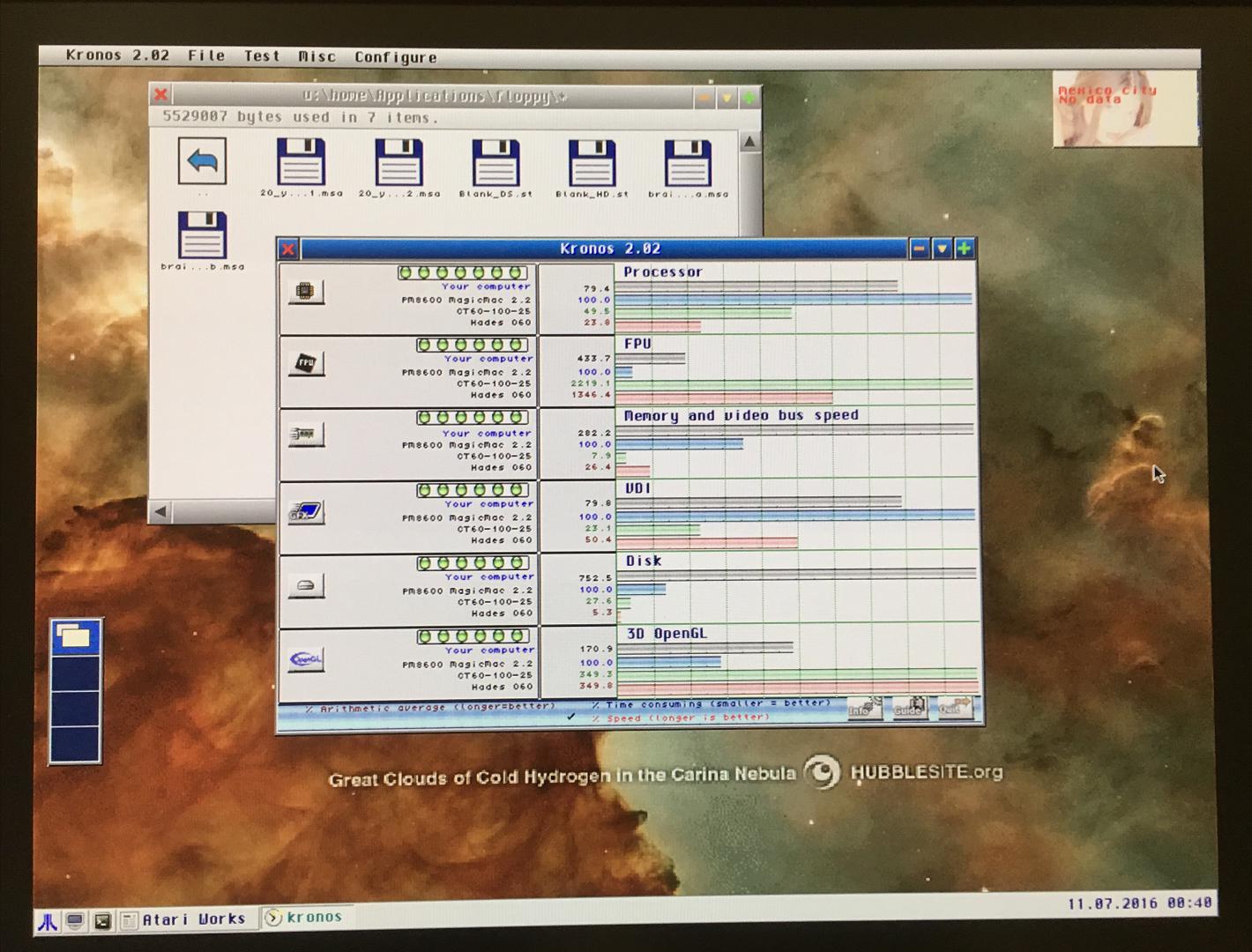 You can forget about web browsing on the BeePi, and I suspect any Atari for that matter. That's because network performance is slow on the BeePi. I'm sure it will suffice for FTP and basic tasks.

Philippe has done an unbelievable job in creating the BeePi and EasyAraMint. It honestly is like a modern Linux distro. Everything you need to get going has been setup and installed for you.

If it wasn't for the four raspberry logos during boot, you would actually think you were using real Atari hardware, albeit super accelerated. Considering how much a Raspberry Pi costs, one has to ask; do we really need to develop TOS clones? Let it be known that I am a staunch supporter of real Atari hardware and its acceleration. But if I had to choose between spending big bucks for a Milan/Hades 060 (if I could even find one) or a BeePi, I might just go for the BeePi. The hardware is actively developed and Philippe has clearly shown his dedication to supporting and developing BeePi.